Also see Other rent-to-buy links (not all Rick Otton)

In August 2017, the Federal Court found that Rick Otton, and We Buy Houses (WBH) engaged in conduct which was misleading or deceptive.  Otton and his company were fined $18million.  See details below.

Otton claims to have tens of thousands of former students.  Many of those included here have been presented in Otton’s advertising, or at his seminars, as successful.  In one case the student gave evidence supporting Otton in court.

In September 2022 Sheree Becker was found guilty of seven counts of obtaining financial advantage by deception.  The fraudulent loans obtained from a bank enabled ‘rent to own’ buyers to pay out their contracts to Becker.

The jury trial lasted 28 days in July-August 2022.   Otton widely promoted Becker as proof of success of his strategies,

The decisions in these matters provides details of Becker’s involvement.  According to the Court, Becker and a third co-accused, Erden Hassan, were “looking for ways to get rid of their rent-to-own contracts by providing their occupiers with loans” and, according to the Court decision,  Hassan, Akkala and Becker would “obtain false documents and information, including false documentation of earnings and false contracts of sale, with a view to obtaining an ANZ loan.”

Glenn Armstrong was a student of Otton’s in the UK.  Glenn has gone bankrupt leaving creditors (many who had attended his ‘Academy’) £5 million out of pocket.  There may not be strong links between Otton’s teaching and Armstrong’s conduct, but Otton used the fact that he trained Armstrong in marketing his courses.

Former Otton student de Leeuw, appears to be promoting Otton’s sandwich lease option strategies (for $10,000).  She claims that you can make “$1million in ‘equity’ and $100K in monthly cash flow in 3 years or less” without using your own money or finance, by setting up one deal per month (36 deals).  It appears one problem for her students is finding vendors who are willing to sign up to these whacky deals.

The decision against Zane Pitt was reversed on appeal to the Supreme Court.  The Court found that the elements of ‘unconscionable conduct’ had not been met. (Updated May 2021).

Initially, in May 2020, The court found that Zane Pitt engaged in unconscionable conduct when he used a lease option to purchase a house from a vulnerable pensioner for a low price.   It appears that Pitt had used the phrase “We Buy Houses” at one point, and Otton and other Otton students are friends on his facebook page.

In August 2017, the Federal Court found that Rick Otton, and We Buy Houses (WBH) engaged in conduct which was misleading or deceptive.  See details.

In November 2018, the Court imposed record penalties on Otton and We Buy Houses totalling $18 million.

The Federal Court also banned Otton from managing corporations for 10 years in Australia and permanently restrained Otton and We Buy Houses from further involvement in the supply or promotion of services or advice concerning real property transactions or investment. See details.

Court heard arguments about penalty on 5 May 2018 – no decision has been made yet but the regulator asked the court to fine Otton and his company We Buy Houses $20 million (AUD). This is the same amount that the regulator says We Buy Houses has made in Australian from bootcamps and seminars since 2000.

Australian Federal Court found that Otton had engaged in misleading and deceptive conduct in relation to his marketing (and his book) including misleading statements about his success using his strategies.   Neither Otton, or any former students, could show the court that one of his strategies had worked ‘in real life’.  Otton was found by the judge to be an “unreliable witness” and was found to have lied to the court in relation to some issues.

In March 2015 when the proceedings were issued, Otton was teaching in the UK and has continued to teach in the UK since.

Ben was a former student who appeared on stage at Otton seminars in the UK with other “successful students”, and made some short videos with Otton.   Ben sold ‘insider secrets’ to ‘buying houses for £1’ and was co-founder of Property TV.  Ben Rogers, was declared bankrupt on 5th May 2015, owing money to people including ‘students’ who had been persuaded to ‘invest’ in his deals.   Rogers continues (in 2018) to promote property investment workshops.  He also claims to have run 365 marathons in 365 days, although this has been questioned on at least one running forum.

I have been told by one of three Australian students who lost their money, that they “invested” tens of thousands of dollars in another student’s deal,  which was never repaid.  Otton regularly shared the stage with this “successful” student.   I don’t know whether Otton encouraged students to lend to each other, but I’m told that the students placed trust in Otton, and therefore in this other student because Otton spoke so highly of him.

From seminar to success story… to getting fined in the Supreme Court of Western Australia: How it happened Property Observer, Jennifer Duke, 10/3/13

Author of “How to Buy a House for $!”.  His Facebook page simply describes his business:

“Invest In Property & Generate Positive Cash Flow From Day One… Without Bank Loans, Deposit Or Experience.”

Some information about Rick Otton, his seminars, or past students, that may be of interest. 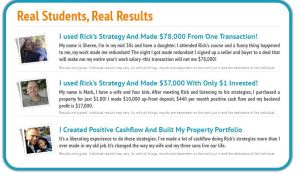 Some of Rick Otton’s responses to legal action in WA:

Response on facebook:  “The courts have now ruled that to say “you buy houses” you don’t necessarily need to have bought one, more so, that the have the ability to do so. If you don’t have the ability to buy a home instead of using the words “we buy houses” maybe “family needs a home” which worked wonders or “soccer mum needs a home” and you will be swamped with calls”

Other responses  from Otton to criticism and regulatory action. (post on this site)