The problem with ‘creative’ or ‘innovative’ strategies is that that the application of the law to the transactions may not have been tested in the courts.  I’ve written previously about what can go wrong for buyers and unsuspecting sellers, and legal rights they might have.  This post focuses on some risks for rent-to-buy operators which have been highlighted by the courts. 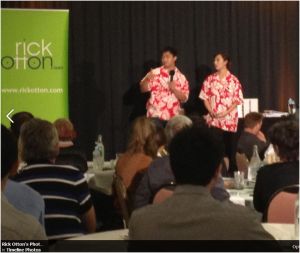 Last week, the Western Australian (WA) Supreme Court foundthat two rent-to-buy operators (brother and sister) made misleading and deceptive statements and that one carried on business as an estate agent without a licence. [Commissioner for Consumer Protection -v- Susilo [2014] WASC 50 (27 February 2014) ]  The couple, touted at one time by Rick Otton as “Big Kahunas” were fined almost $30,000.

The New South Wales (NSW) Supreme Court was busy on the same day, ordering that the house price in a vendor finance contract be reduced by 30 percent because contract was unjust.  [Gray v Latter [2014] NSWSC 122 (27 February 2014) ]

Misleading statements
Whether a statement is misleading will depend on the circumstances, so I have summarised some of the statements found to be misleading in the Susilo case and the Court’s reasons.

Contrary to these claims, they “did not buy houses” and used option to buy or joint venture arrangements and would not exercise that option unless a purchaser was found who would enter into and exercise the option.

Any sale of a property as part of a Rent to Buy Arrangement would not be completed immediately or within a short period of time.

They weren’t part of a group of real estate investors.

The “purchasers” would not be able to own the properties without obtaining bank finance at some stage.

Advertising the houses for purchase at a weekly amount was also found to be misleading, because the house could not be purchased simply with the weekly payment, but required the payment of an upfront fee, and payment of the full purchase price therefore probably requiring bank finance at some stage.

top
Real Estate Agents’ licence
The Court found that the Ms Susilo was acting as a real estate agent “in that she was engaged by, or was acting on behalf of, the owners of the properties the subject of the transaction to locate a prospective lessor or purchaser of the property and she received monetary reward for locating a purchaser, and that “Ms Susilo performed the usual functions of a real estate agent in marketing the sale of properties, dealing with enquiries regarding the purchase of the properties, showing properties to prospective purchasers and receiving deposits for the purchase of properties”

Two points that may be of interest to rent-to-buy businesses (but I would, of course,  encourage them to check my interpretation by reading the decision) were:

The WA real estate legislation specifically states that someone must hold a licence if they act as an agent in relation to “an option to enter into a real estate transaction”, however, the Court did not specifically rely on that clause, but considered the activities engaged in more broadly (as outlined above).

The Susilos entered into a joint-venture with the seller in one of the matters before the Court, and the Court included facilitating “a joint venture rent to buy arrangement” as one of the “Rent to Buy Arrangement[s]” it considered to be the “business of a real estate agent”.

top
Rick Otton comments
The Susilos appeared alongside “successful” past students (referred to by Otton as ‘Big Kahunas’) at one or more Otton seminars.  It appears that Rick Otton was referring to this case, as well as his own “banning” in WA, when he made this post in November 2013 (prior to the final outcome in Susilos’ case).  Otton expressed concerns that in WA “people need a real estate license in order buy, sell or trade a property option”.   Otton bemoaned the fact that this “change” in the WA laws, “was never debated or challenged”.  While Otton may have been referring to some other change that I’m unaware of, it appears that  the requirement to be licensed in WA to arrange property options has been in place for at least 35 years.

While the court didn’t specifically discuss the reference to options in the legislation, I suspect that as far as “creative” property strategies, the question of whether an estate agent’s licence is required in WA (and possibly the rest of the country) may have been settled. top

Gray v Latter
This was a somewhat different case in NSW but it also has some bearing on rent-to-buy deals.  In this case there was no intermediary, it was a one-off sale and the sellers were not in the business of doing property transactions.  However, the Supreme Court found that the sale on vendors terms was unjust on the basis that the price of the property was “exorbitant”, default was inevitable at the end of the contract period, that terms of the vendor finance concealed the improvidence of the transaction, and that there was exploitation by the sellers of “trust and friendship”.  The sale price was $240,000 compared to evidence presented to the Court of estimated value at the time of sale of $167,500.

The Court found that the national credit legislation (NCCP) didn’t apply because the sellers weren’t providing credit in the course of a business.  However, the NSW Contracts Review Act did apply and the Court made orders to re-write the terms, including a reduction in the contract price by $72,500. top

Implications of these cases
The following is my personal opinion – I am not a lawyer.

Fix up your website, ads and signs The Court relied on the Australian Consumer Law (Commonwealth) in finding the various statements to be misleading, so it is likely that similar statements would be found to be misleading in all other states.  While there could be prosecutions in other states for conduct over prior years, it’s better to comply late than never.

While there is an extensive list available from this case, the general approach should also be used as a guide to other statements that might be found to be misleading.

There are many rent-to-buy operators making similar claims to those made by the Susilos.

“No bank”, “buy my house” “we buy houses” “we buy houses fast” and “own this home, no bank, $600pw” are found in photos of Rick Otton seminars and in his book “How to Buy a House for $1”.  All these statements could be true of course, depending on the circumstances.  However, if you don’t own the house, aren’t offering to buy a house outright, or aren’t genuinely offering finance where no mainstream loan will ever be required, the Court says they are misleading.

If regulators were at a loose end, they could fill their days following up
Google results for these statements.  Of course they don’t have time to issue proceedings against everyone, but businesses, and seminar presenters, are on notice.

You can’t use the excuse “someone taught me”  The problem for any seminar students is that it is not a defence to prosecution to say that someone suggested, or taught them to make particular representations.  As Rick Otton student Rowan Lines complained, when she also ran into trouble with Department of Commerce WA,  “Why is it, that out of 10,000 Rick Otton students, I have been singled out and have a case to answer in Supreme Court?….I did not invent this. I learned it.”

Unjust contracts: The decision relating to the exorbitant house price was based on the NSW Contracts Review Act.  However, this legislation contains similar provisions to the unjust provisions in the NCCP.  While purchasers in the same position in another state may not obtain a similar outcome from a deal which is not in the course of business, similar provisions of the NCCP may apply if a party is in the business of providing credit, or holds a credit licence.

A finding that a contract is unjust under the Contracts Review Act, or the NCCP, is usually based on a combination of a number of factors, rather than just one.   It is therefore difficult to directly apply a decision to another case.  However, rent-to-buy agreements where it is unlikely that the purchaser will be able to refinance and eventually own the property, are clearly open to challenge, and in such a case sellers and operators may find other aspects of the deal being examined in detail, which could include the price, representations made, advertising and the selling strategies used to sign up the buyer. top

Reference to other court and tribunal cases involving rent-to-buy can be found here.